Cesar made it to the audition for the painting class. This year wasn’t about grades, he only wanted to be accepted by the teacher he admired the most. One C from him meant more than any other A.

Each year, only twelve students made the cut and many dropped out. Last year, two left out on the first weeks. Cesar knew they were exceptionally talented. Grades prestige was their poison, he thought.

On the line to the audition, he noticed the gal in front didn’t bring student grade oils, but Olholla ones. “Make sure you don’t over saturate the skin,” he told her. “Envy,” she responded without turning her head. He had always wanted to paint with them, so he wondered: Is this envy? “Melissa, he’s right, I wouldn’t use them,” said another student. That’s envy!, thought Cesar in relief.

As they entered the room, they were given a piece of paper and a pencil, but no eraser. One mistake and I’m out, Cesar thought. No words were spoken there, only moving chairs could be heard. In the middle, there was a girl on a Chinese dress ready to pose. He quickly remembered rule number one, don’t make a kid stay still for long.

The teacher walked to the girl and slowly raised his arm, palm up, pointing to her face.

Showtime!, said Cesar in his mind. He was no longer worried about making a mistake. He sketched her like a master, not with his wrist but with his arm. In no time, he blocked out a well-proportioned face and finished the drawing in two minutes. 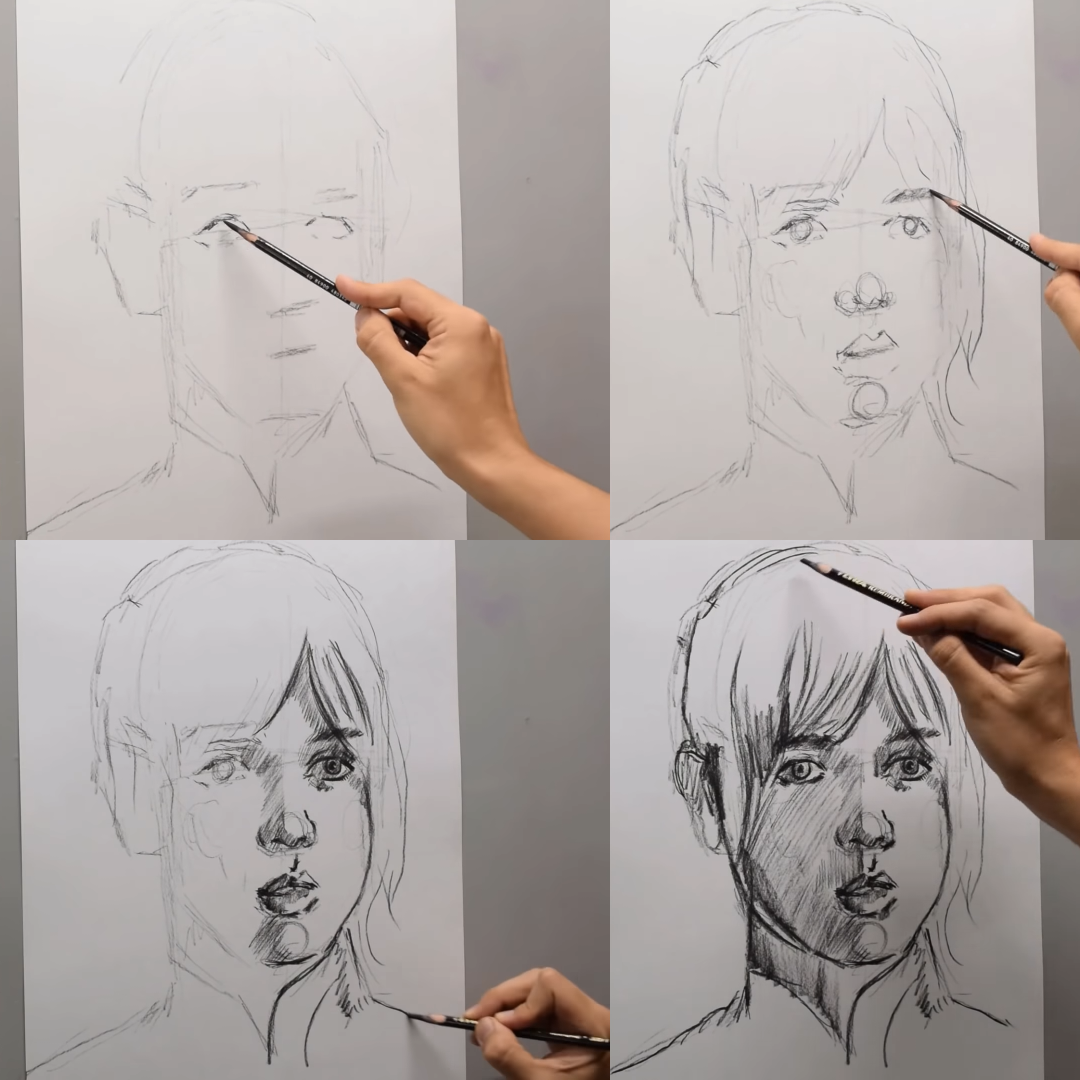 Walking between the sturdy wooden easels, the teacher noticed that Cesar had stopped drawing. He told him: “Do it again, here’s a rag.” Cesar made a concerted effort not to say or make any gestures. He thought: I’m here to show him what I’ve got. He was ready to make it better, so he grabbed the rag, erased the drawing, and restarted it. 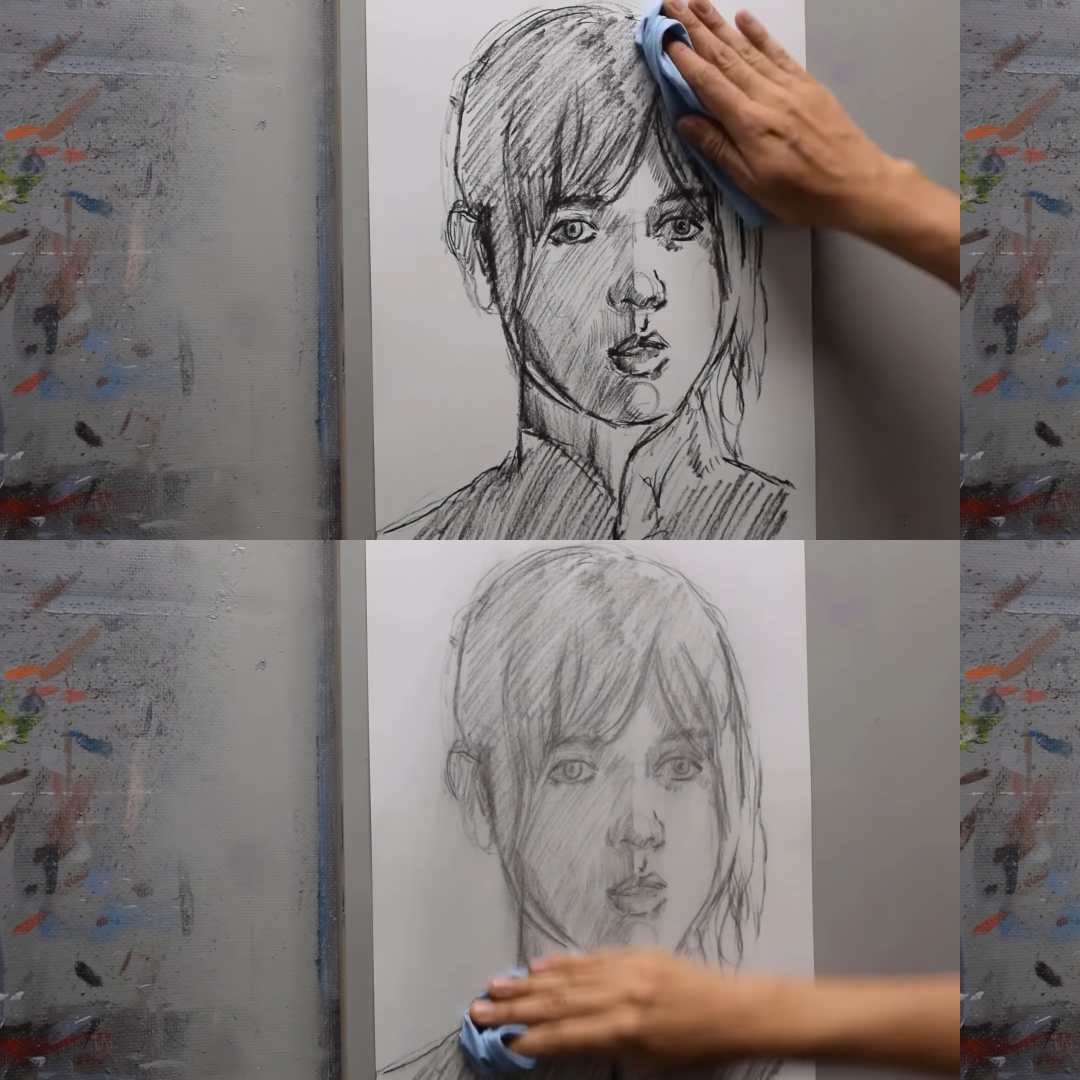 This time he drew more carefully, and as soon as he finished the teacher told him in an expressionless tone: “Start it over.” Immediately, Cesar grabbed an eighty grit sand paper from his bag and rolled the pencil on it until it had a long and sharp tip. 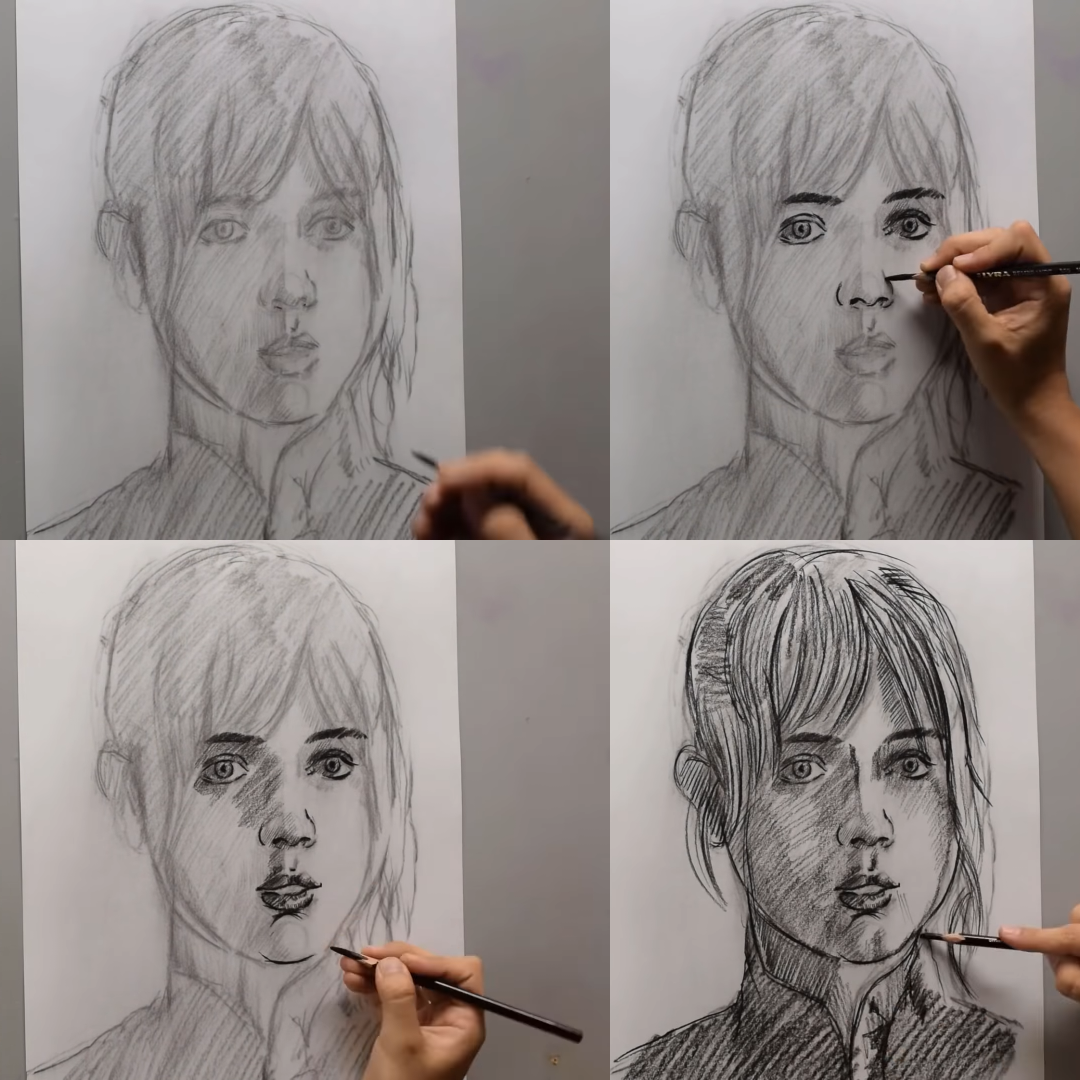 When he finished, the teacher looked at him and made a small circle in the air with his index finger. Cesar quickly wiped off the drawing. 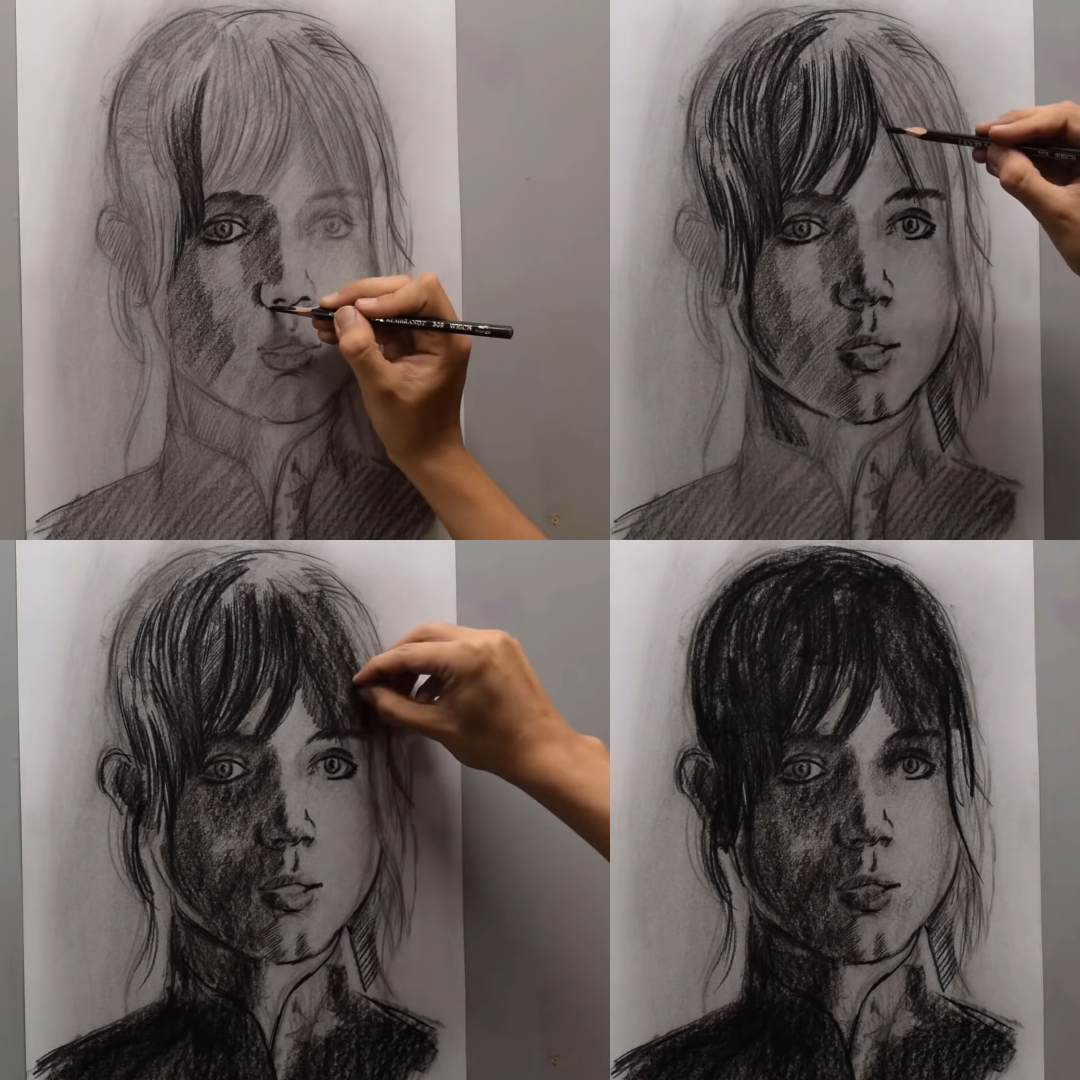 The paper was full of charcoal, and his confusion felt darker than it. When the teacher came by, he gave him a kneaded eraser and an eraser pencil. “Wipe it off, but this time bring out the highlights.” 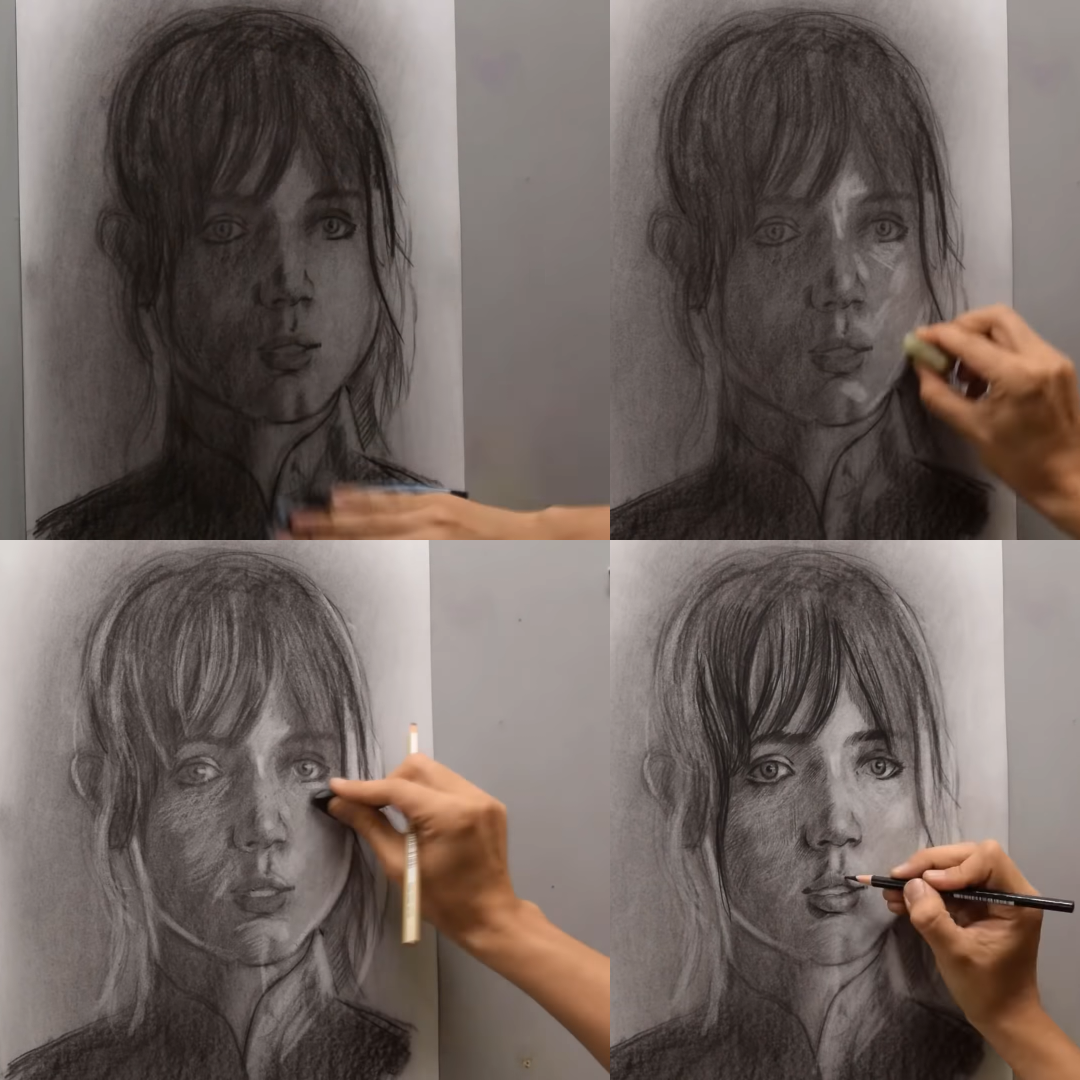 Cesar was excited, he had never seen such a result. He kept adding details with great joy.

When finished, he didn’t sign it. He secretly wanted the teacher to tell him to do so. Meanwhile, he looked at the other candidates, they were amazed by their results as well, and they were leaving the room looking proud at their pieces. 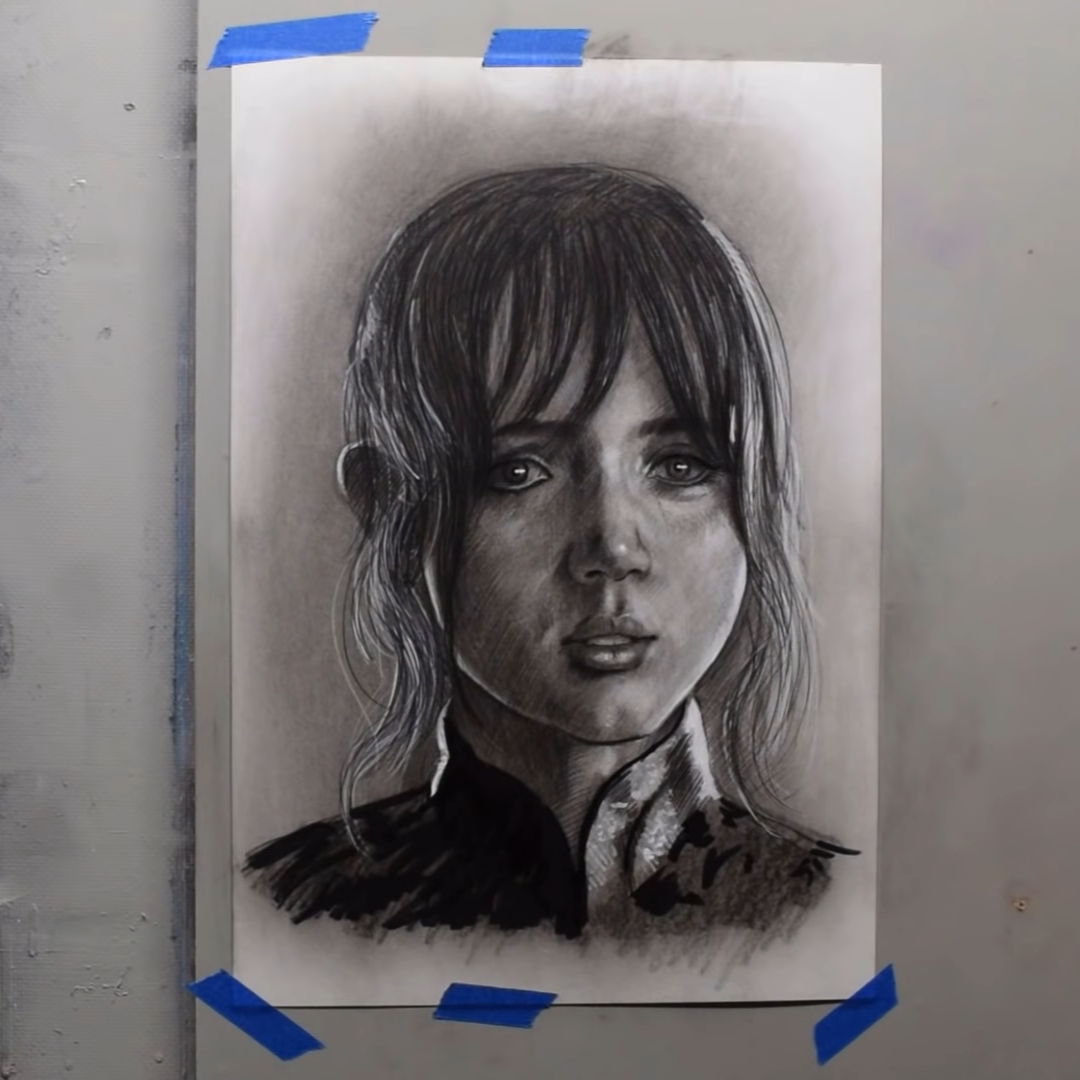 Finally, the teacher came by his easel, took a quick look, and calmly told him: “Tear it up.” Cesar’s astonishment rose quickly. He didn’t want to throw it away, and he kept looking at the other candidates leaving with their precious drawings.

Suddenly, without thinking more, he tore it up. The teacher turned around and told him: “Bring your brushes on Monday. I will teach you painting.”

Cesar woke up ready for his first day of class. It was far from any other first day. He felt as if he had known the teacher for years.

He arrived twenty minutes early and to his surprise, the teacher was already there. Moreover, he was welcoming each student with a warm good morning.

The next minutes felt like seconds to Cesar. He wondered if the teacher was cold on purpose during the audition or if he is like that at class. Maybe it was a bad day, and today he’s fine, was his last thought.

“Welcome ladies and gentlemen. Today we are going to continue with last week’s lesson. No, I’m not going to ask you to tear up your paintings.” He paused for a collective sigh. “Today you’ll paint with water.”

“Watercolor…,” said a student.
“Water. You’ll paint anything you want with plain water.”

Bewildered, Cesar took a brush and started painting. While watching the water dry out on his dark canvas, he heard: “Keep painting. Keep painting.” He couldn’t tell if he imagined it or if the teacher said it. Nothing made sense to him, but he trusted the teacher.

“Notice the difference?” the teacher asked the watercolor student. “Yes, it vanishes out.”

“Notice the difference?” he asked Cesar, but he said nothing.

The answer must be the lesson, Cesar thought. Then his focus went from his painting to himself painting. I’m not rigid, he felt. “I’m painting more relaxed, teacher.”

Right, tearing up the drawing wasn’t relaxing at all. Why do I trust this man? Of course, his paintings. Trust him, keep painting. He looked around and the student next to him was painting a circle over and over. Cesar imagined him drilling a hole through the canvas.

Patience! That’s it. Patience is the lesson. Wait. I mean tolerance. Patience the water; tolerance the tearing up the drawing. But that’s two lessons, I bet it’s only one.

He kept repeating to himself: erasing; tearing up; painting with water. Suddenly, with a hint of satisfaction, he said: “Sir, results don’t matter.” “They matter,” the teacher quickly replied.

At home, Cesar kept painting and watching the strokes disappear. His mom asked: “Do you need money? That’s the cheapest paint I’ve ever seen”.
“No mom, I’m fine, thank you.”
“Why are you painting with water?”
“That was today’s lesson, mom.”
“And for how long do you have to practice that? The priest is coming by, and I don’t want him thinking that you need money for school.”
“I’m not practicing, mom.”
“Sorry, I forgot how much you love painting.”
He smiled, went outside, and looked at the sunset. Today that orange was more than cadmium red and yellow ochre. It was the exact color his soul was glowing.

“Good morning, ladies and gentlemen. As the semester is about to end, I want to do something different these two last days. But first, thank you for staying with me. Thank you Juán, Melissa, María, and Cesar. It’s been a great pleasure.”

He went to the classroom next door and brought the girl they drew the day of the audition. “I’m sure you remember her, and I know you wanted to keep those drawings.” A slight pause was his only apology. “Today you will paint her, and I want you to keep the painting for the rest of your lives.”

“You may begin.” He headed to his office, he wanted to avoid interfering with the lesson in any way. There, he hoped for the impossible for two long hours.

Before entering the classroom, he closed his eyes for a second. “As you may know, all of you have C. It’s an honestly earned one, I hope you are proud of it.” He wanted to take a glimpse at all the paintings, but he controlled himself and went one by one.

“María, come here. Can you see it now?”
“Sir, I can see it from my chair, I didn’t see it on my painting.”
With a hand gesture, he told her to sit back.

“María, now you have B.” He walked around and said: “so do you, you, and you. I will see you on Friday for the A.” Their eyes watered on the last ‘you’. María dropped a tear and said: “that’s just water for painting.”

Friday, the teacher didn’t present himself. He left a note on each student’s chair with an assigment based on their particular weakest point. The blackboard said: I’ll be in my office until midnight.

Melissa had to paint a portrait illuminated by a red light. Although her skin colors were perfect, they were always the same ones.

Cesar’s note said: You can paint like a master, but can you paint like a kid? He grabbed the note and walked back and forward the hallway. He remembered Picasso’s famous, line: ‘It took me four years to paint like Raphael, but a lifetime to paint like a child.’

Walking faster, he hit the road. Each step made him remember something. I’m going nowhere, he thought and stopped. He crossed the road to a cattle field. He was about to climb over the fence, but instead he laid flat and rolled underneath it. He smiled. That’s how he crossed them as a child. He didn’t have to run on the field, when he saw the cows at a distance he said: “Good God!” He remembered the days his mom couldn’t afford the milk. He wanted nothing but a cow at home.

I want a cow in my exhibitions; a holly cow! he thought on his way back. He made a few drafts. One of them had a cow contemplating tens of paintings of lovely blue and green grass fields. He knew it was impossible to paint all that in a day, so he then drafted a cow looking at a single painting. Yes, it's good, he thought, but that’s not going to get me an A. So he went outside, and as he didn’t want to focus on anything in particular, he just looked at the horizon. When he brought the cow to his mental picture, he said out loud: “This is it!”. He juxtaposed the cow with a painting within the painting. He was as happy as a kid drafting it. 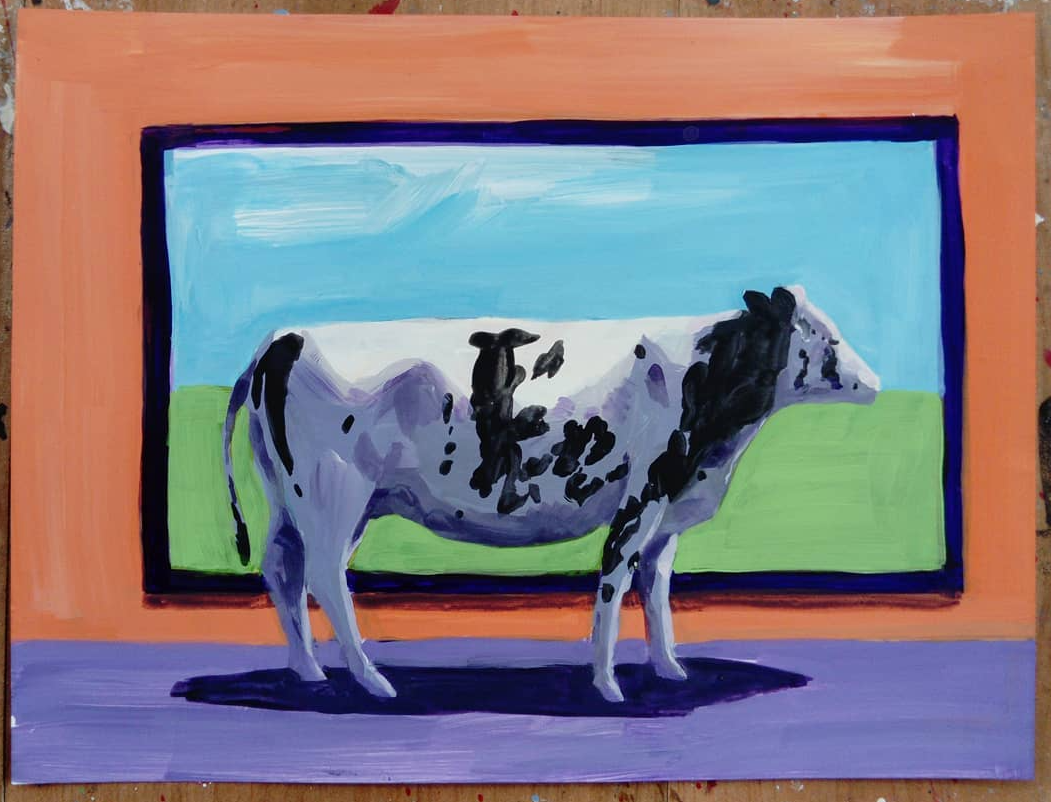 He painted all day. 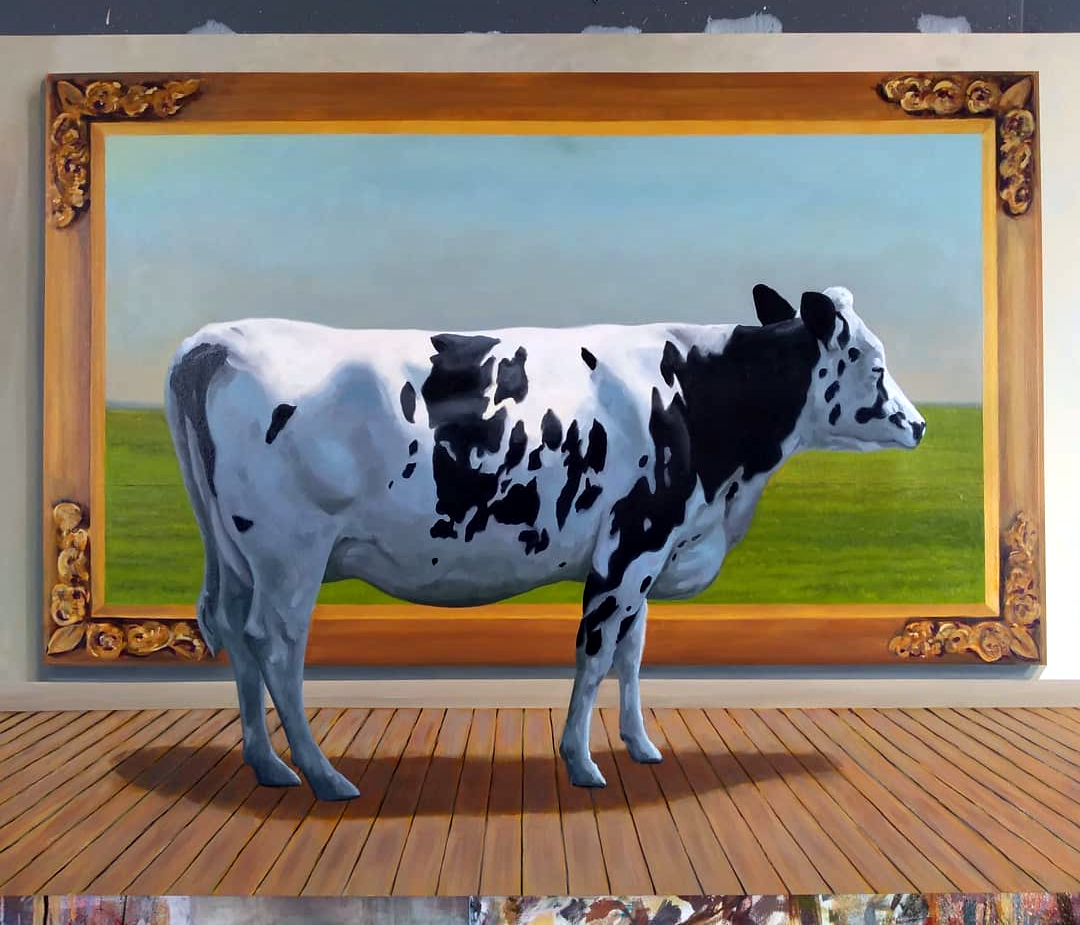 He pictured it with his phone, and sat outside a cafeteria, that he realized it had closed hours ago. He noticed the sub-painting horizon and said, “Sorry little cow.”. In an app, he previewed a few color adjustments, and headed back for the final touches. 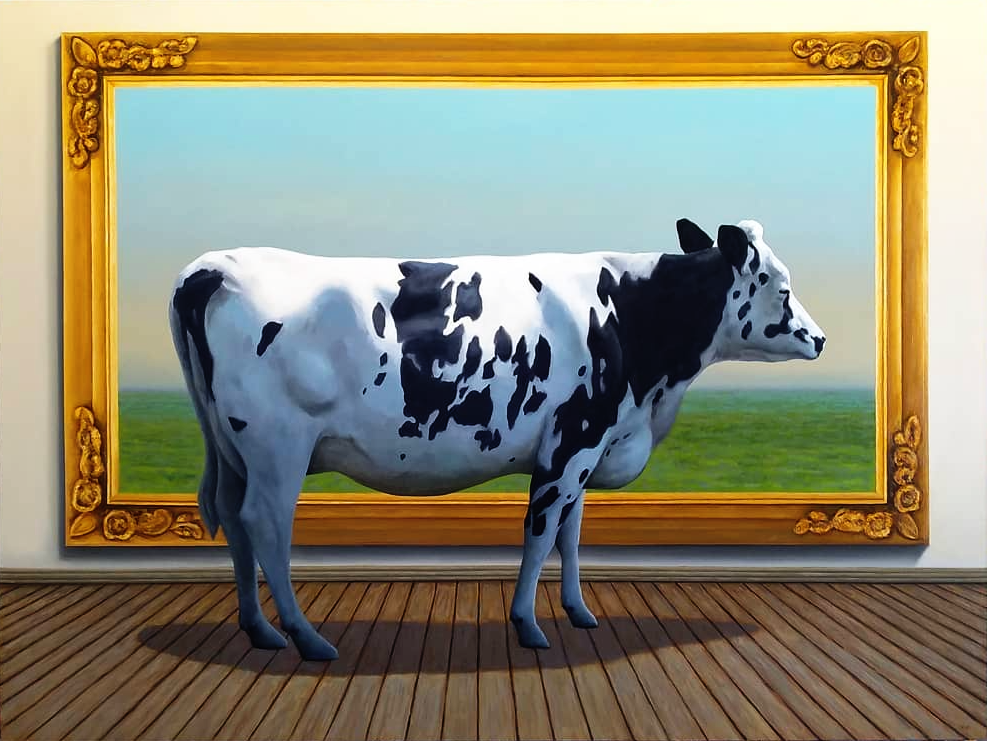 Cesar, headed back to the classroom and put his brushes in mineral spirits. Melissa was staring at her painting in frustration. He said: “Tell me.” She needed the portrait to be illuminated by a red light, but there was no hint of such light. “Glaze it,” he told her. 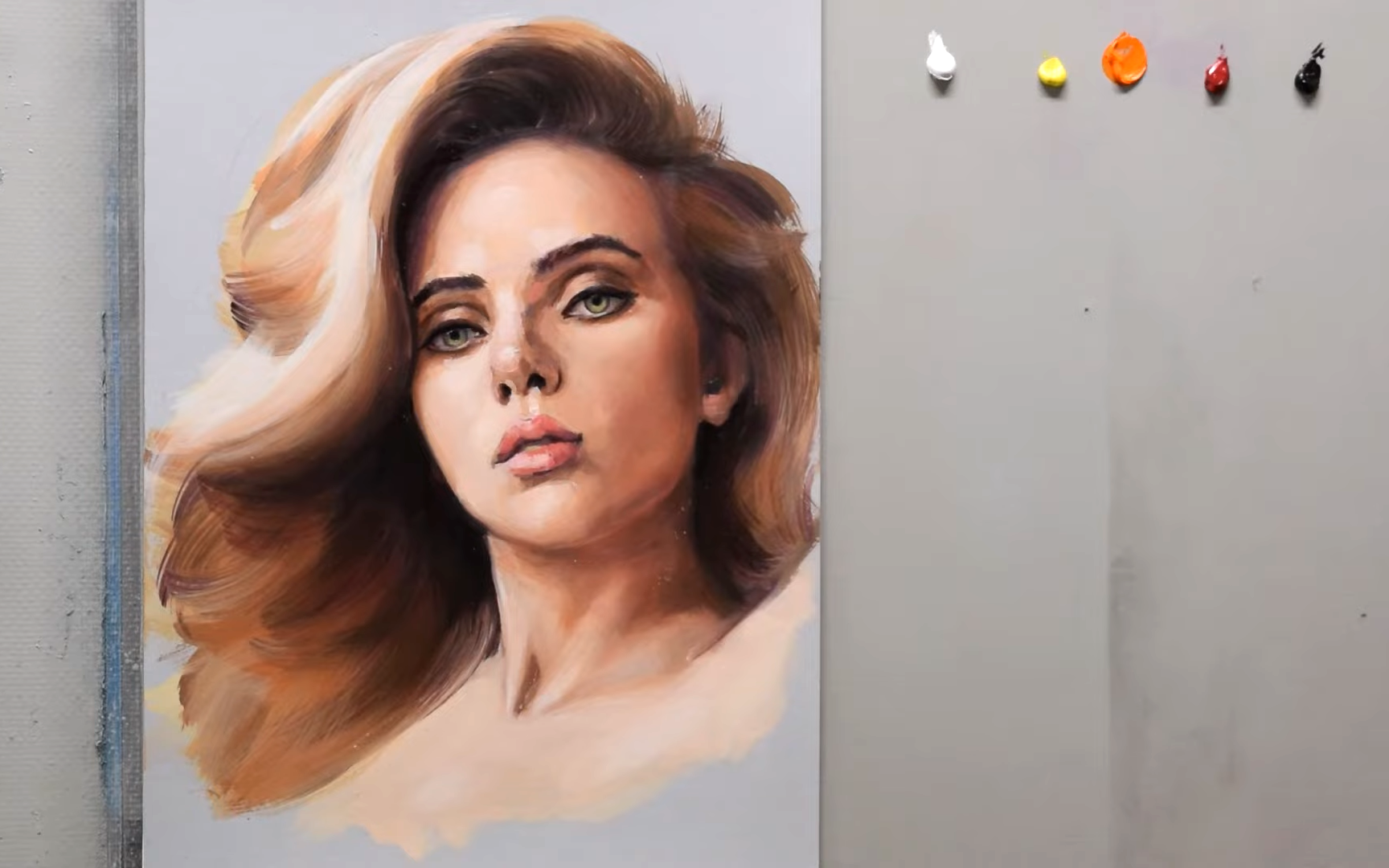 “What’s that?”
“It’s easier if I show you.”
“OK.”
He grabbed two heat guns from a drawer, he knew the teacher would not mind cracked paint.
“No! It’s going to crack the paint,” she said.
“Not if I heat it from the back.”
“Don’t melt it.”
“Take this one, hit it from the front.”
When dried, he started glazing it. 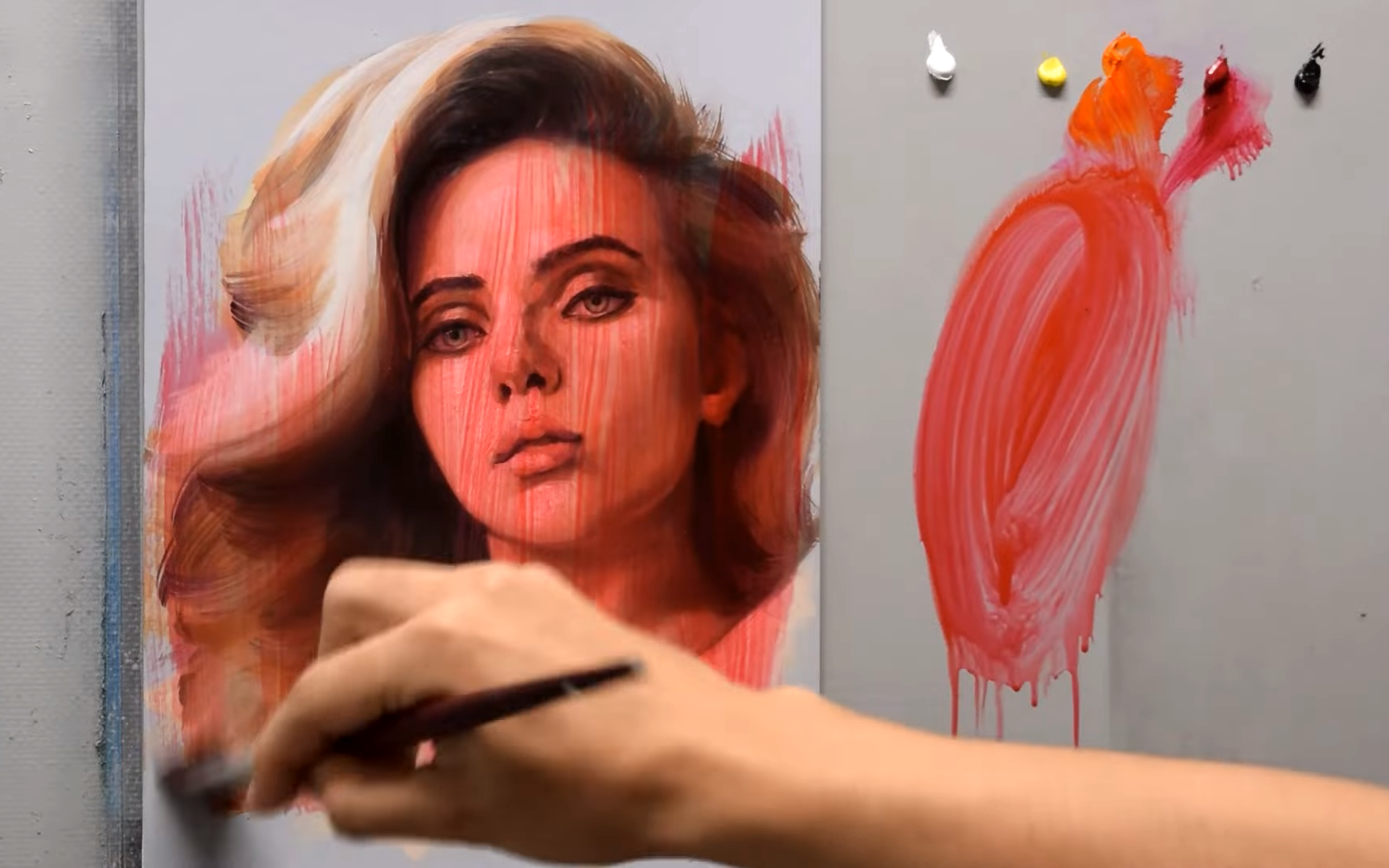 As soon as she saw her painting ruined, she left the classroom without looking back and screamed: “Envy!” 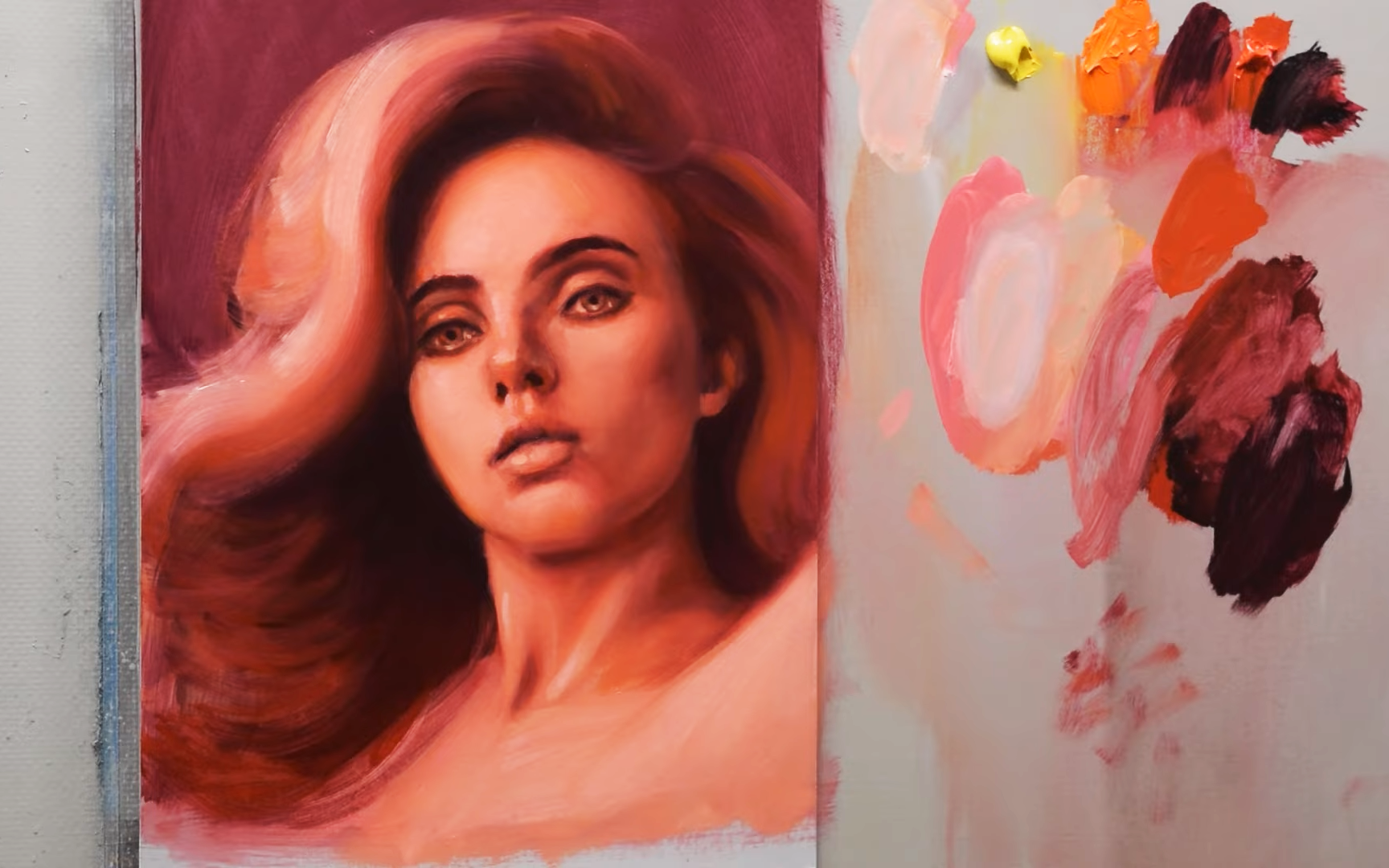 She never saw the result.

Years later Cesar became a teacher as well. On the first day of class, his students have to draw from an upside down reference. He explains: “We all have preconceptions. We form opinions without adequate knowledge. Drawing is no different. When we draw an ear, we think we already know how it is. We’ve drawn many, but we’ve seen few.”

“By drawing upside down you will learn a way for staying to true to form. Outside class, you may trace with projectors, AR overlays, or any technological aid. Is that cheating? No, it’s not. Painting is not skill-bragging.”

“Outside, you’ll also decide if your paintings stay true to form. That’s your choice. But it’s not a choice if you can’t draw.”

Based on a true story. You can listen to Cesar Cordova telling it while drawing the girl in his YouTube video: The Reason Why You Should Destroy Your Work.